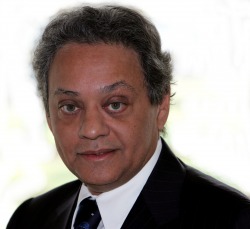 Dr Khalil Hamdani has been involved in multilateral economic cooperation for more than three decades. He has held a variety of managerial, technical and policy positions in the United Nations. He is a senior international news editor on economic development. He is an active proponent of South-South cooperation.

Dr. Hamdani held a permanent appointment with the United Nations and was most recently Director of the Division on Investment, Technology and Enterprise Development, which comprises 100 researchers and staff. His Division produces the annual World Investment Report. He oversaw the intergovernmental deliberations on international investment matters in the United Nations system. He created the United Nations programme on investment policy reviews, which was declared a “valuable mechanism” by the G-8 Heads of State Summit in 2007. The related series of investment blue books received the Smart Regulation Africa Investor Award in 2007, and in 2005. He has provided policy advice and training to investment officials in Africa, Asia, the Middle East and Latin America. He has interacted with governments at the highest level. He is a frequent speaker at conferences and is a member of several advisory councils.

Dr. Hamdani has prepared UN reports, published journal articles and is co-editor of a book on The New Globalism and Developing Countries (UNU Press: 1997). He is co-author of a book on the United Nations Centre on Transnational Corporations (Routledge: 2015). Prior to joining the United Nations in 1978, he taught and undertook research in Pakistan, his native country. He is a graduate of Georgetown and Johns Hopkins Universities, and holds a doctorate in economics. He is married to Saleema Mumtaz and they currently reside in the United States and Switzerland.

Although retired, Dr. Hamdani undertakes occassional assignments. His most recent activities include: advising Nepal on graduation from the least developed countries; appearing before the working group of the Human Rights Commission; serving on the Board of CUTS International, a civil society organization; advising Nestlé, a transnational company, on creating shared value in developing countries; providing inputs to the WTO discussions on investment facilitation for development; and contributing to the UNDP Human Development Report. He is currently Visiting Professor at the Graduate Institute of Development Studies, Lahore School of Economics.